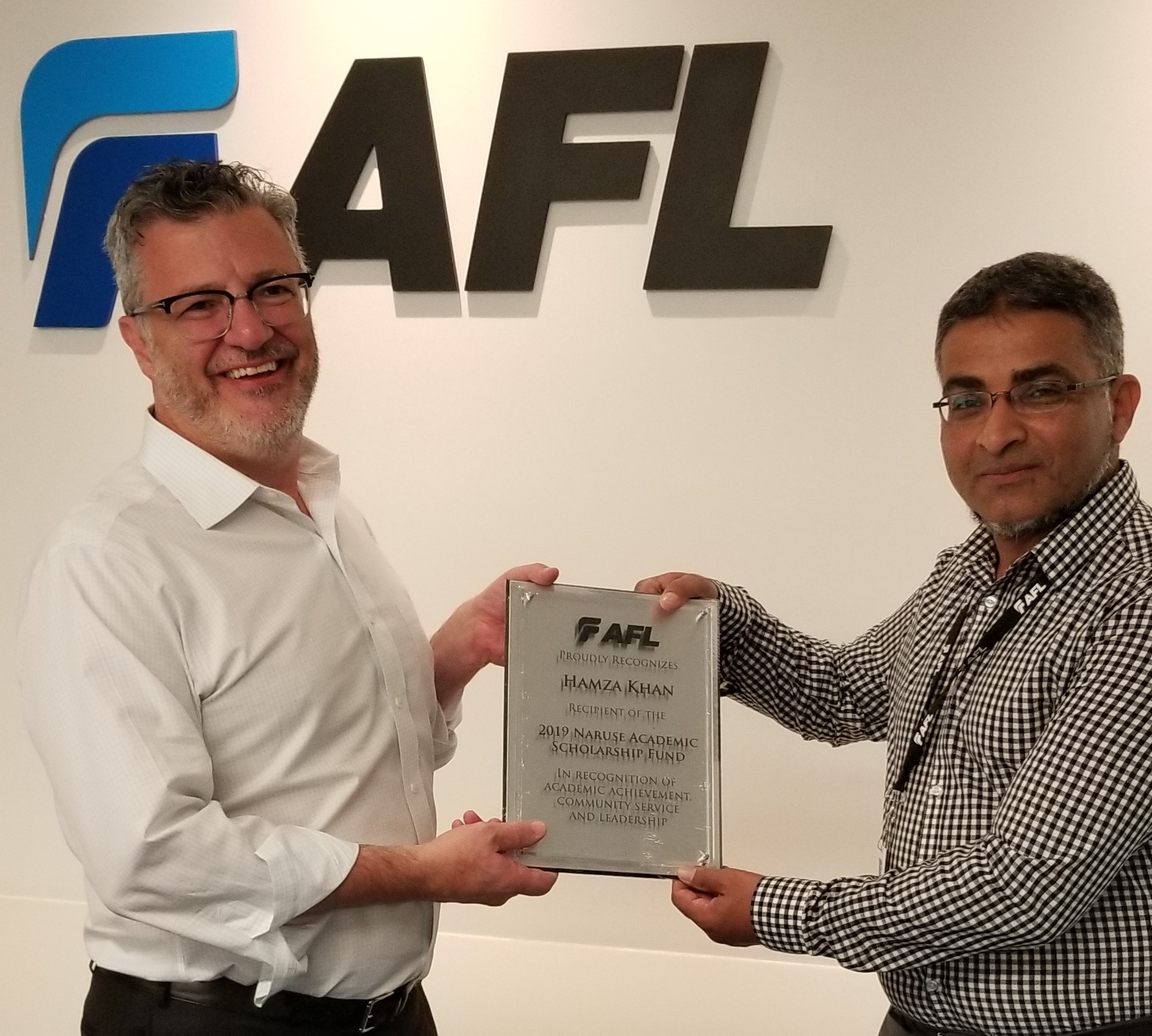 Spartanburg, SC – July 9, 2019 – AFL, a leading international manufacturer of fiber optic cable, accessories and equipment, presented two Naruse Academic Scholarship awards to the sons of two AFL associates—one located in British Columbia, Canada and the other in Kent, Washington. Scholarships were awarded to Hamza Khan, son of Abdul Khan, project coordinator for AFL’s Network Services Division, and Steven Le, son of Thai Huynh, production assembler with AFL Hyperscale. This award recognizes students that have stellar academics, achievements and community service, and provides $2,000 per year for four years toward the cost of tuition, room/board, books and more.

Hamza Kahn graduated with a 3.9 GPA from Tamanawis Secondary School in BC, Canada where he was a member of the executive student council and volunteered his time to help young people succeed. Hamza balanced academics with coaching, mentoring and fundraising for causes he is passionate about. He was the founder of two programs supporting elementary youth. Inner Light is an organization that mentors students who may lack social skills to fit in with their peers. Hamza helps develop confidence and social skills through athletics and teaches soft skills needed to be successful. Hamza also started Kick for Kids—mini indoor soccer tournaments that allow access for those who don’t usually get involved in organized sports to play in a safe and encouraging atmosphere. Proceeds from Kick for Kids are donated to SOS, a local orphanage, to enable the purchase of athletic equipment for those in need. Hamza plans to attend the Sauder School of Business at the University of British Columbia to pursue a Bachelor of Commerce degree.


Steven Le graduated from Highline High School in Washington with a 3.5 GPA. Described as conscientious and academically-motivated, Steven has been interested in computers and programming since middle school, helping family and friends with hardware and software issues. He enjoys robotics and learning about emerging technology. A hard-working student, Steven has made the Honor Roll since 2015 and was accepted to five universities. He plans to attend Western Washington University and major in either computer science or biology. Although undecided which track he will take, Steven would like to be a software developer or a pharmacist. Steven says he lives by the motto, “You miss 100% of the shots you don’t take.” [Wayne Gretzky].

Each year, AFL awards a four-year scholarship to the son or daughter of a North American-based AFL associate entering a college or university. The scholarship was named in memory of Toshihide Naruse, Managing Director of Fujikura, AFL’s parent company. Mr. Naruse’s contributions to AFL were significant, and because of his personal interest in higher education, AFL continues to honor his memory.

For more information about AFL and its Community Outreach Program, visit www.AFLglobal.com.

About AFL
Founded in 1984, AFL is an international manufacturer providing end-to-end solutions to the energy, service provider, enterprise and industrial markets as well as several emerging markets. The company’s products are in use in over 130 countries and include fiber optic cable and hardware, transmission and substation accessories, outside plant equipment, connectivity, test and inspection equipment, fusion splicers and training. AFL also offers a wide variety of services supporting data center, enterprise, wireless and outside plant applications.

Headquartered in Spartanburg, SC, AFL has operations in the U.S., Mexico, Canada, Europe, Asia and Australia, and is a wholly-owned subsidiary of Fujikura Ltd. of Japan. For more information, visit www.AFLglobal.com. Follow us on LinkedIn, Twitter, and “like us” on Facebook. Review our blog or subscribe to our bimonthly e-newsletter.